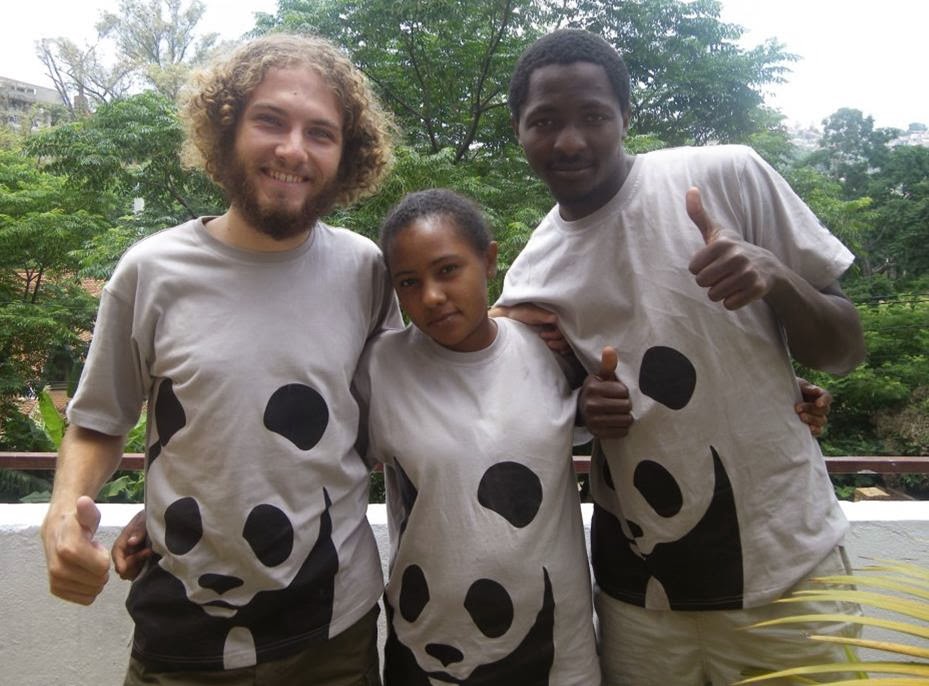 From left to the right Oliver Sommer (Germany); Sahala SOAODA (Madagascar) and me
During a three months period (from September to December 2013), I was enrolled as volunteer with an amazing intercultural team for the project MG200901 – Climate Change Adaptation in Madagascar, Vulnerability Analysis at Baie d’Ambaro with World Wide Fund for Nature.


The marine and coastal ecosystems of Madagascar are rich in biodiversity and this biodiversity is increasingly threatened by climate change and anthropological impacts. Close interactions exist between coral reef systems, sea grass beds, mangrove forests and coastal forests. Therefore, it is important to focus attention not only on one ecosystem type, but rather to analyse the vulnerability of all ecosystems involved. The objective of WWF Project MG200901 is to analyse these vulnerabilities and the adaptation to climate change. The September 2013 WWF Explore Volunteer program focussed on the mangrove ecosystem in the bay of Ambaro, situated on the northwest coast of Madagascar, DIANA region. There was two groups of three volunteers based in the villages of Ankazomborona (Tatiana SAADE from Lebanon, Guilaume Lippinois from Belgium and Michael Murunga from Kenya) and Antsatrana (the group on the picture).
Activity goals given by WWF

Objective: Educate the village population on the importance of mangroves by using different types of communication and visual support
Activities:  Establish or bring along teaching material like films, posters, songs, etc.

Organize a public event every two weeks (film projection, theatre, songs, etc.), in order to explain the ecological importance of mangroves and the anthropological threats for this ecosystem


Fishery Catch Monitoring
We worked with WWF Intern Felix Saidale from Madagascar. We learn the Malagasy name of local fish, different kind of fish who live in the channel and the sea. We met also some fishers, with them we talked about how they fish, what they fish and their difficulties. In fact our work consisted to weight what the fishermen brought from the sea, and to measure some of them. 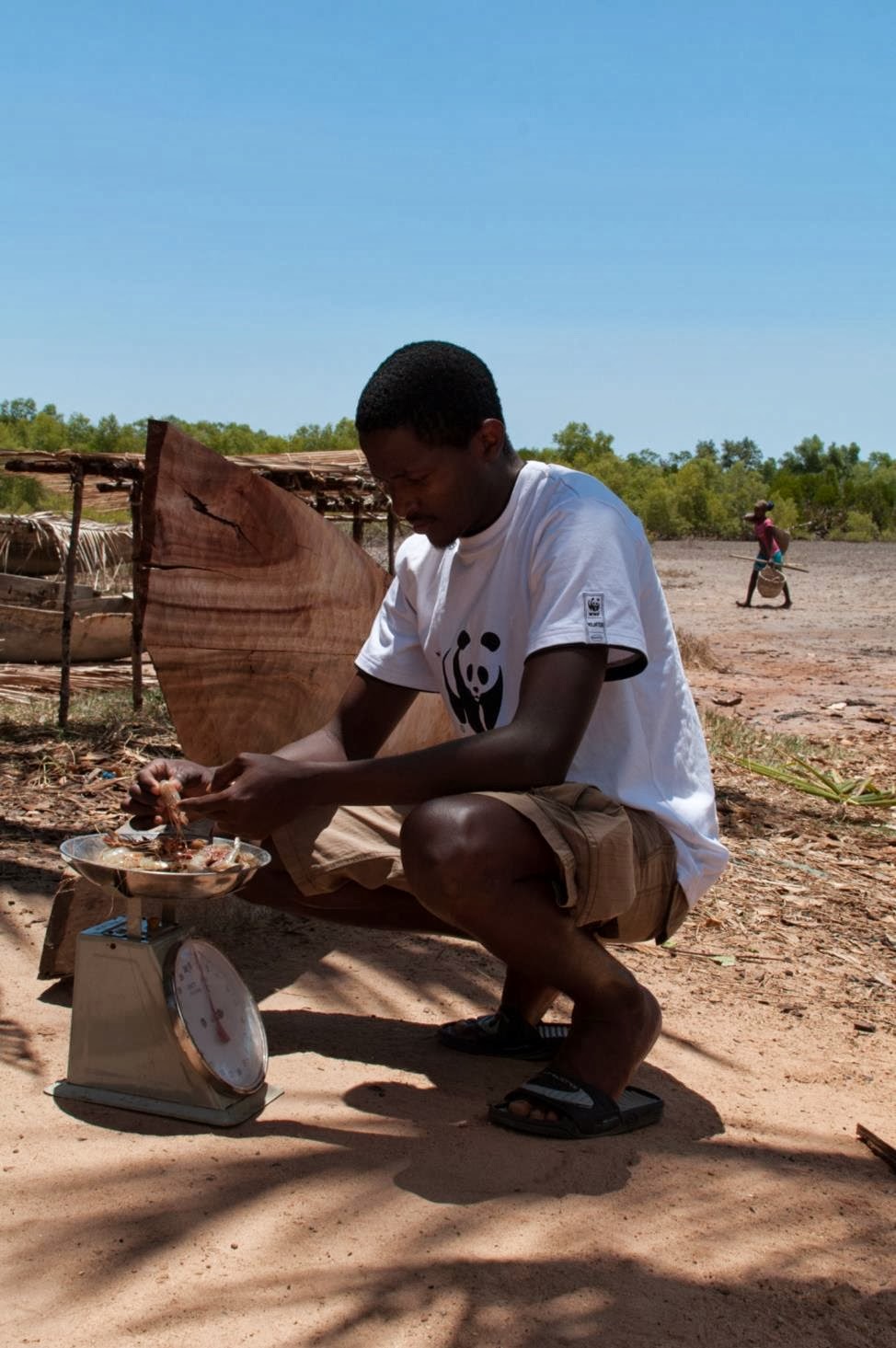 
Re-enforcement of women associations’ capacities
The women association were divided in two different associations; the first was for old women and the second for young women. The main goal of this activity was to educate and support members of the women’s associations in order to develop alternative income resources. Suggested activities included language courses, cooking lessons, and hygiene and waste treatment awareness-raising and establishing vegetable gardens.
We had language classes every Wednesday and Friday at 3 pm, for about one to two hours, depending on the punctuality and concentration of the students. 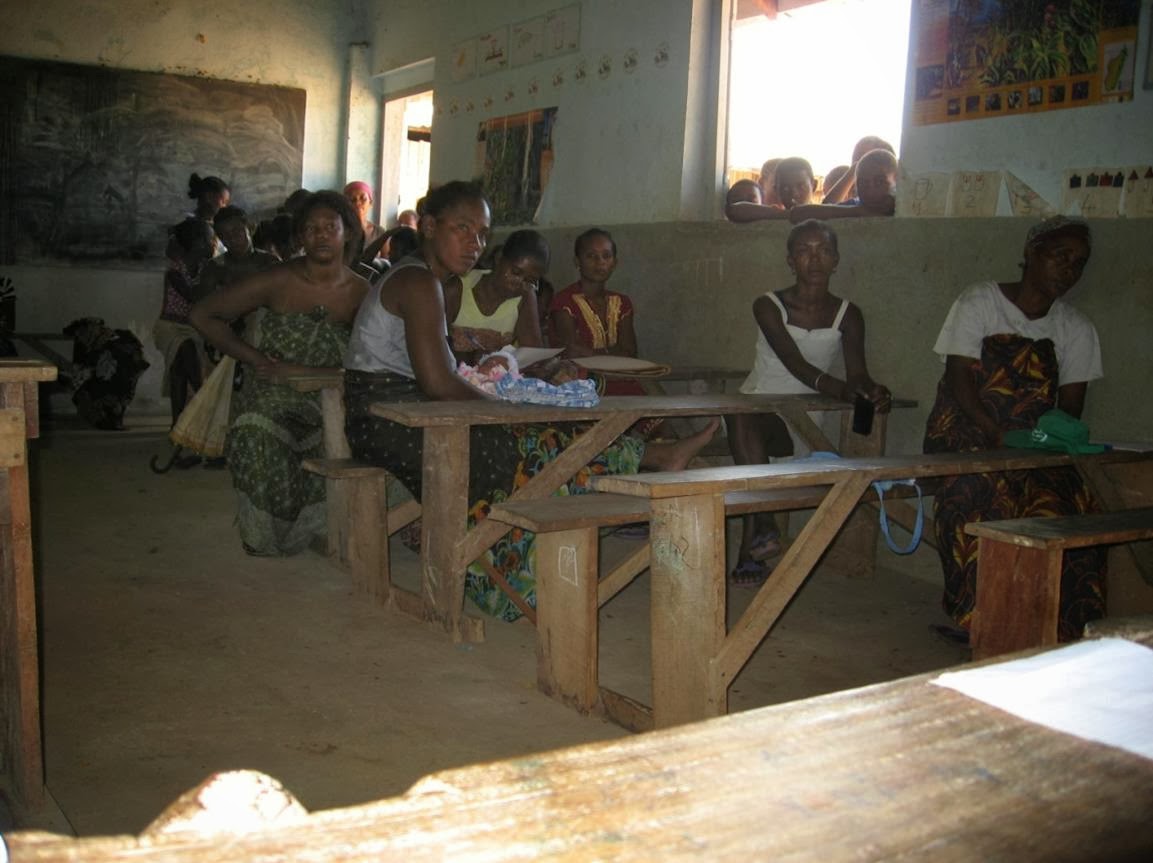 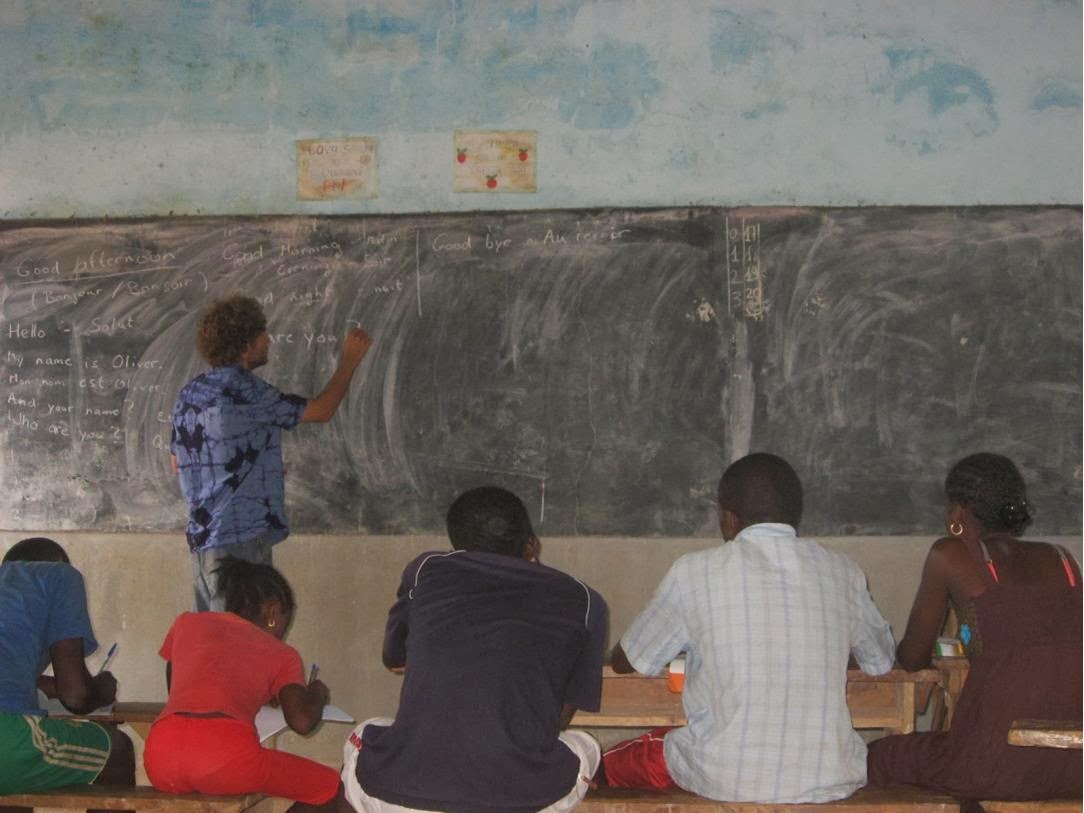 
We did a cooking class where we showed a possibility of international cooking with ingredients one can buy in Antsatrana. The recipe was Empanadas Argentina’s, where the filling can be chosen to be any filling with meat, seafood or vegetables they are already familiar with. 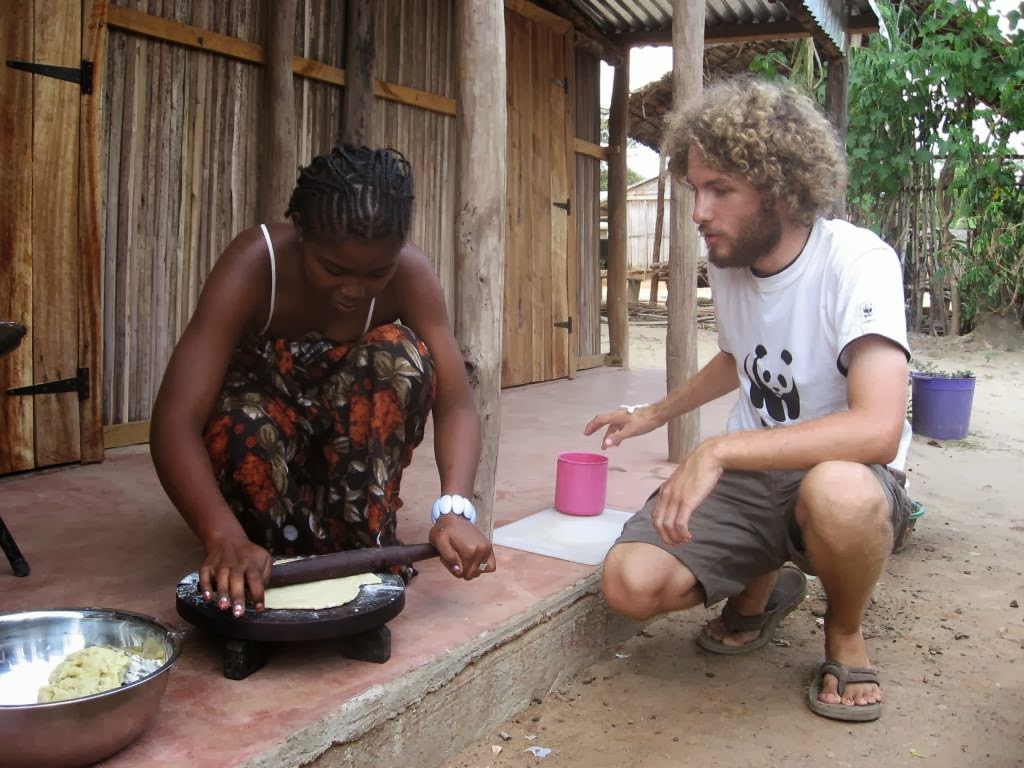 Volunteer Oliver giving cooking lesson (Empanadas from Argentina) (WWF Canon/Walter Tapondjou)
On the other hand, in the course of a ROSEDA project, a WWF partner organization, beneficiaries amongst women were chosen to obtain equipment for establishing a new vegetable patch. 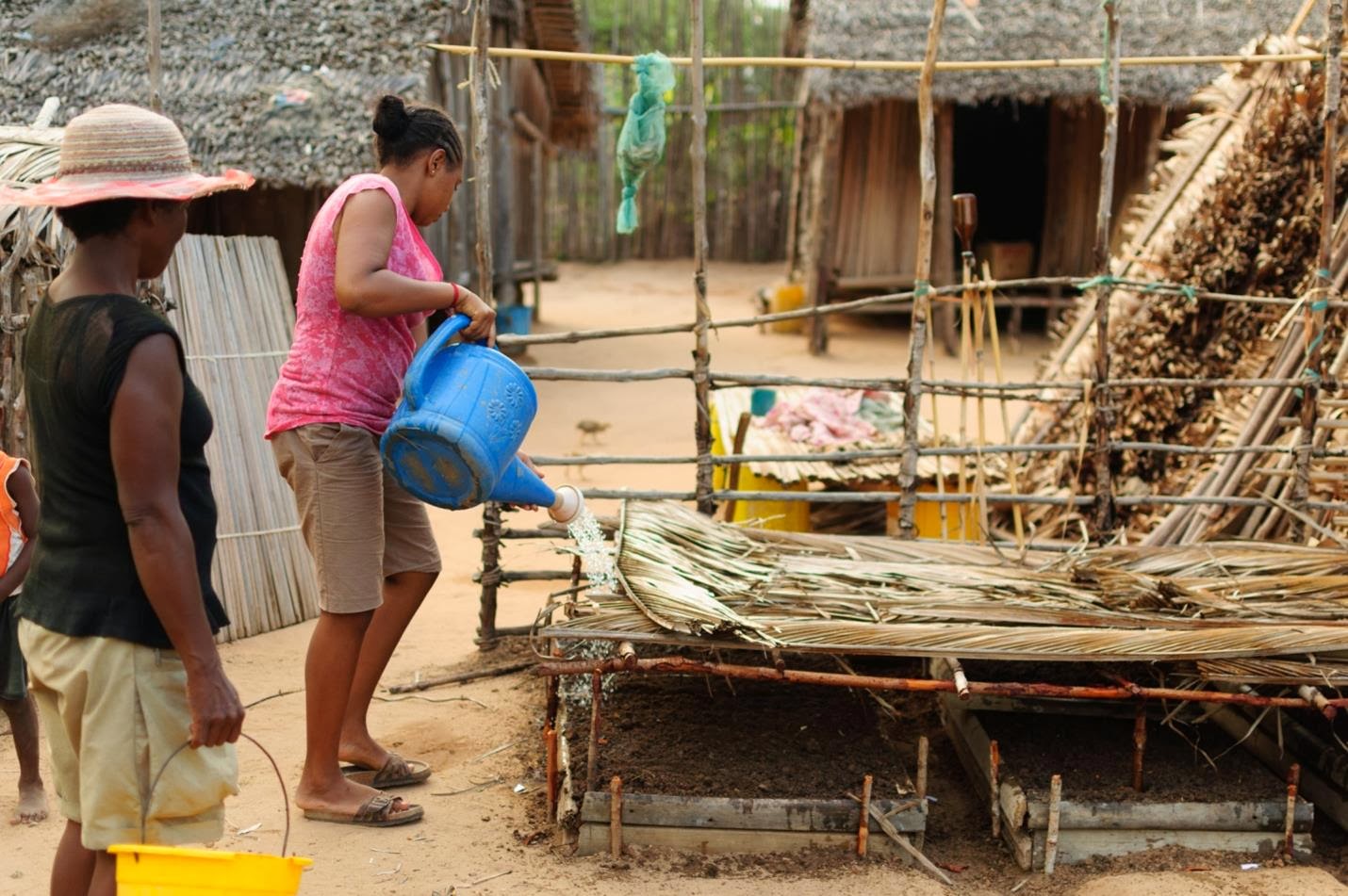 
Environmental education on mangroves
The principal objective of this activity was to educate the population on the importance of the mangroves surrounding them.
The villagers do not use their resources on a large commercial scale, but rather only for local commercial or private usage. However, they generally lack the comprehension for the larger picture, such as the impact of trash in coastal and marine ecosystems as well as secondary problems, such as erosion caused by deforestation. Also, general notions of ecosystem, climate, food chain, etc. were mostly unknown. We attempted to close these gaps and educate the population. At the same time we raised awareness on hygiene and the use of basic composting toilets, the sorting and treatment of trash and a sustainable use of natural resources. The overall environmental situation in and around the village of Antsatrana, however, was not too bad. 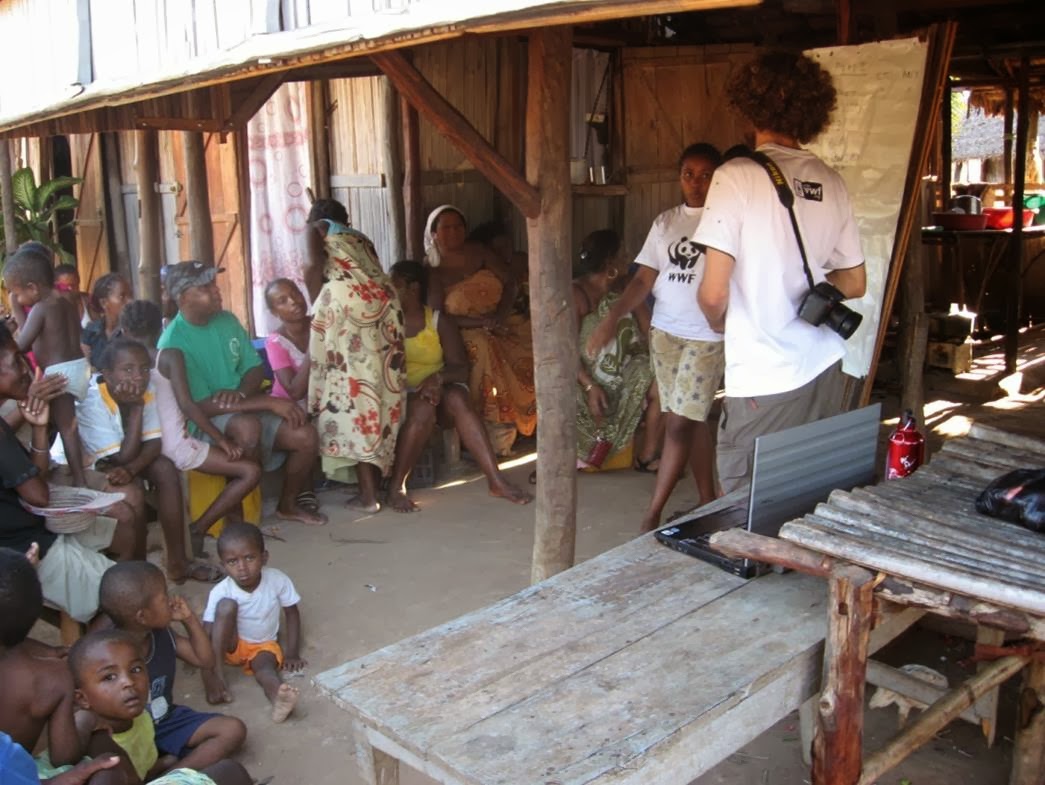 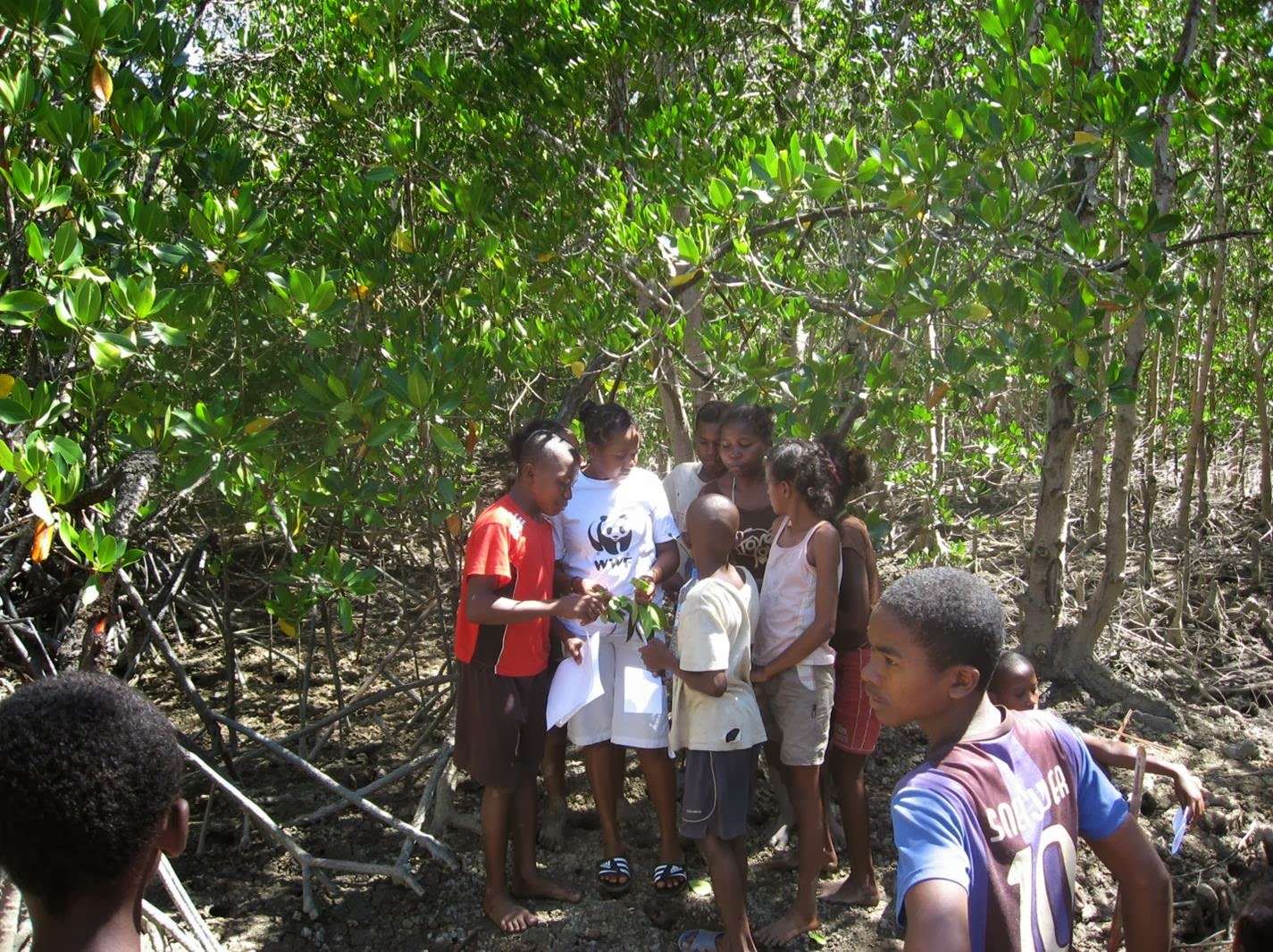 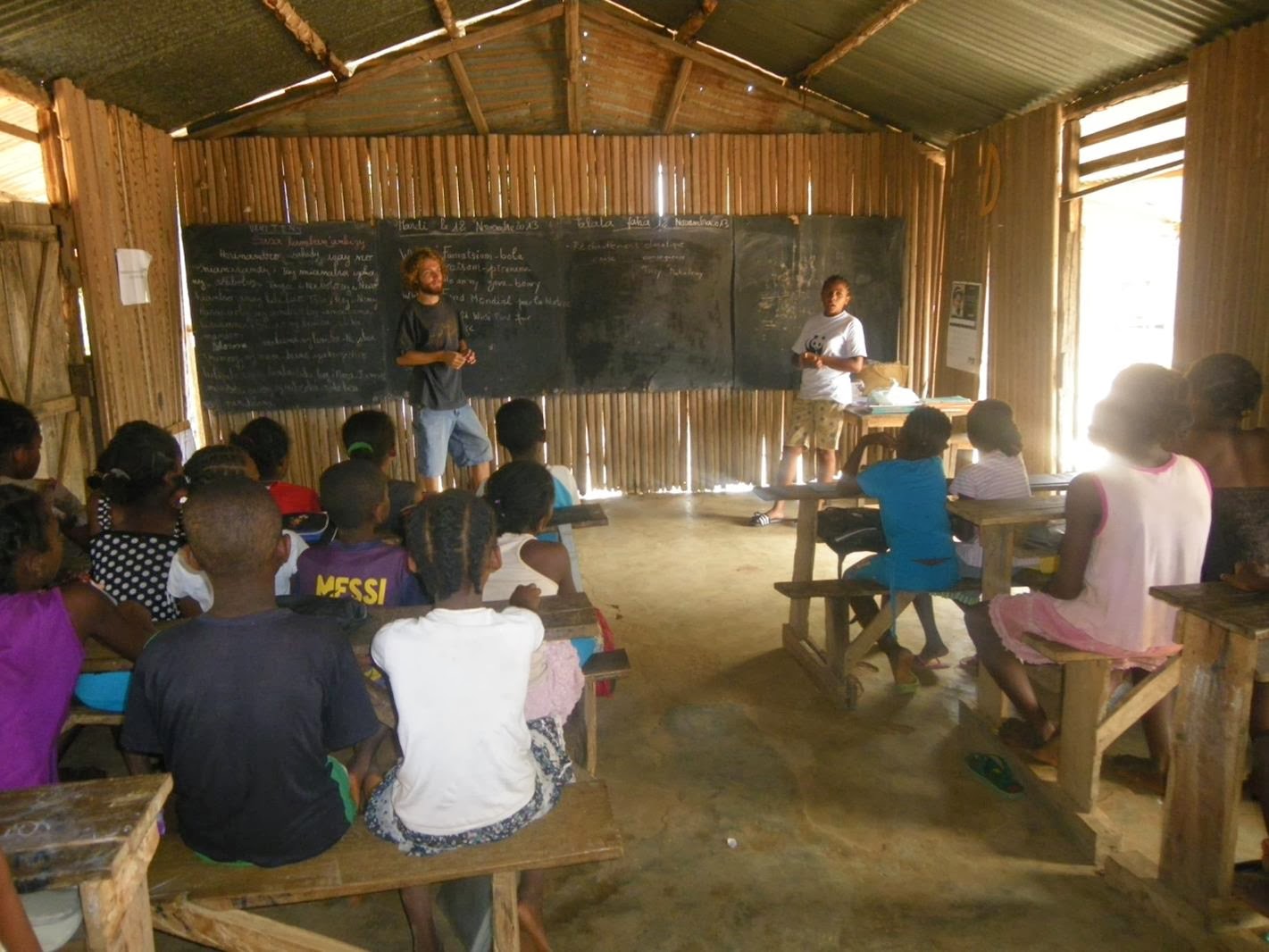 
We organized and carried out an environmental education session in Bengolo. This is a village near Antsatrana, it is only accessible by foot during periods of neap tides and is located right on the sea. During a visit to this village we made contact with the sage of the village and scheduled a session. Due to its extreme proximity to the sea and its accessibility only outside spring tide periods, this village is another fisher community like Antsatrana and Ankazomborona. 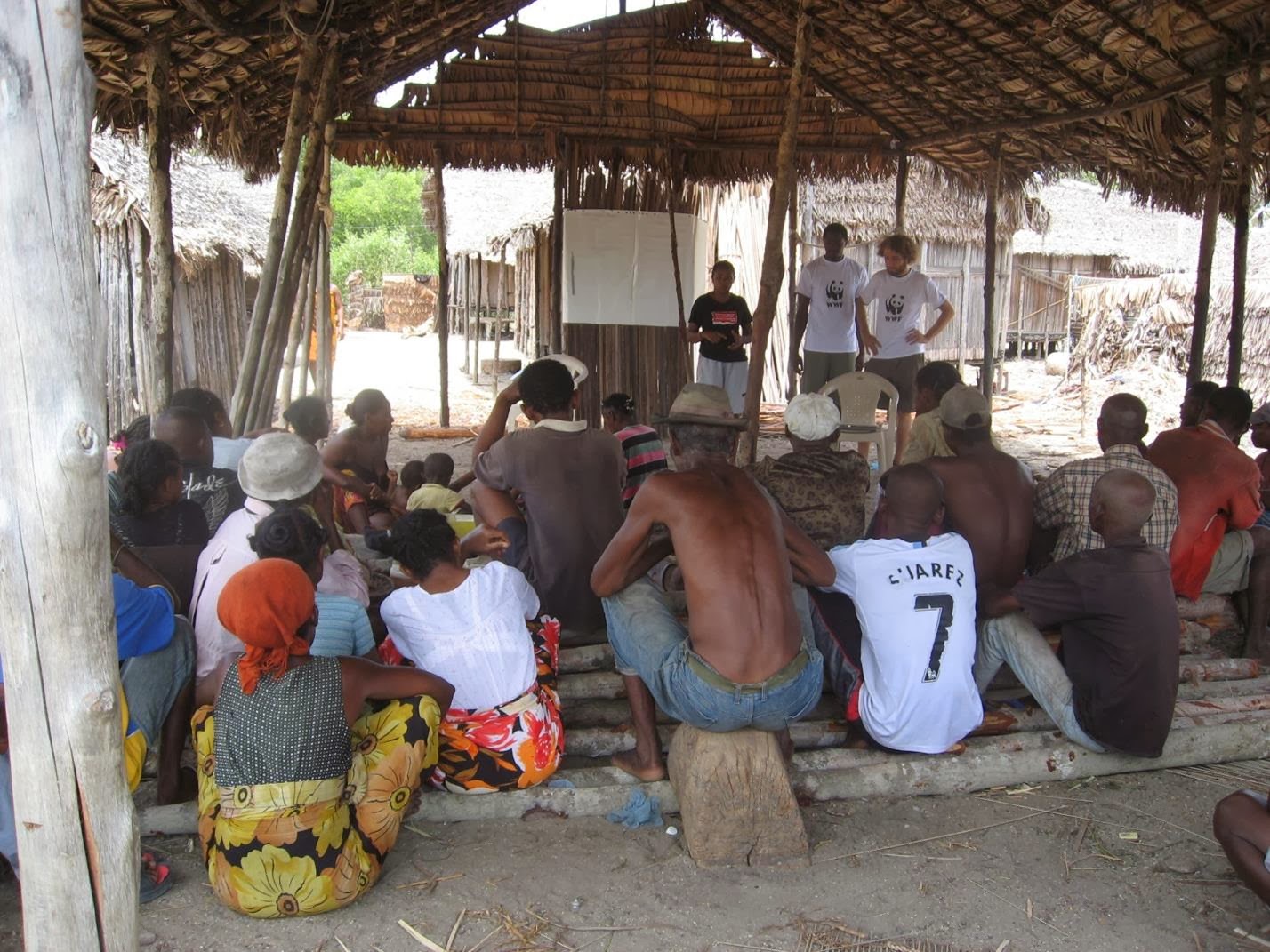 Villagers from Bengolo during an environemental session (WWF Canon)
In this village it is not possible to set up basic composting toilets due to the tide levels. There is also a huge problem of batteries that are tossed around in the village and even in the ocean, and finally piles of garbage near homes and the entrance to the village. During this session we showed them our film Rakoto I: Garbage. Then we presented an awareness session on Climate Change (causes and consequences) and how to straighten the bar. We also distributed leaflets about sorting waste to the women. At the end of the session the villagers had some questions such as how to have access to safe drinking water like their neighbours in Antsatrana. And we encouraged them firstly to create an association and then to approach the one from Antsatrana to be informed on how to receive support for their development.
Publié par Walter Paulin Tapondjou Nkonmeneck à 13:19 2 commentaires:

Bush meat is a great biodiversity threat in my country Cameroon. Big snake are also concerned by this threat.


On this video you can see a Python killed and sold by some villagers in the road Nanga-Yaoundé in the Centre region of Cameroon. This one have been bought for 35.000 CFA Francs (US$ 70) by a friend. It was a male of approximately 6 meters long. This species didn't have luck to come across a villagers.
The greatest threat of snakes is due to villagers believes, then in Cameroon when a snake of this size is found; there is no way of mercy! Because the snake is considered as a man who has take the appearence of a snake (Gri-gri, Totem) to hurt people or something else. It could be advised to build a little educative program for local people, to sensibilize them about what to do they see a snake, and his importance in the wild.
Publié par Walter Paulin Tapondjou Nkonmeneck à 16:45 Aucun commentaire: 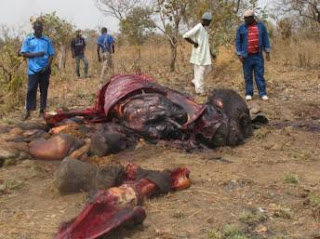 One of the Eco-guardian said: the Bouba N'djida elephant are killed since 4 years (camnews24, 14/03/2012)
Local populations help poachers from Sudan and Chad by showing them the areas where the elephants were hiding. Indeed, the source said on condition of anonymityn people were tired. For years, they complaints about the damage caused by these pachyderms regardless of the Cameroonian authoriries. Elephants regularly destroy their fields and put them in a situation of mass starvation (Le Septentrion Infos)
The number of elephants killed 128, according to the Cameroonian government or that of 480, according to park management indicated by World Wildlife Fund (WWF) should properly be placed on the back of the Cameroon government has not taken on time, drastic measures to avoid the worst despite the cries of alarm associations, NGO's and Western States.
Publié par Walter Paulin Tapondjou Nkonmeneck à 00:20 1 commentaire:

Didynamipus sjostedti is presently classified as ‘endangered’ (EN) by the International Union for Conservation of Nature (IUCN). Presently this species appears on no other lists (e.g. CITES) requiring monitoring or affording any measure of protection. The classification of D. sjostedti as endangered is based on it satisfying criteria meriting such consideration during its last assessment by the IUCN in 2004.
Didynamipus sjostedti was once considered the rarest bufonid in Africa (Grandison 1981), being known from only two locations (Bioko and SW Cameroon) and 6 specimens. Since that time, no fewer than five additional populations have been discovered, extending the range into southeastern Nigeria and northwestern Cameroon. 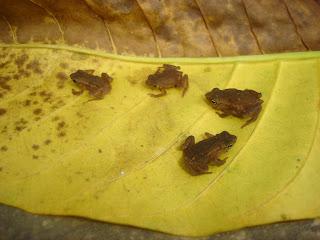 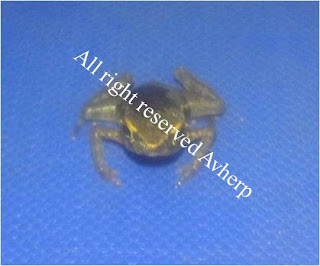 Occurring in primary and secondary forests, edges and even clearings at elevations of 200-1250m, D. sjostedti inhabits a remarkably broad range of habitats. The occurrence of this species within a given area appears to be highly localized, occurring in ‘congregations’ of five to 40 individuals (Gartshore 1984).
Didynamipus sjostedti was described in 1903 from “Kamerun” (Cameroon) and in 1906 (as Atelophryne minuta, synonym) from the island of Bioko, Equatorial Guinea. In the most recent assessment of this species by the IUCN in 2004 it was stated that there is no recent information of its status on Bioko as it had not been seen since 1965. Weinberg (2008) has since published the results of a photographic survey of the amphibians of Bioko that reported the observation of D. sjostedti “in abundance” on the southern slope of Pico Basile.
In addition to Bioko, the IUCN report describes five (5) known populations, for a total of six (Mt. Cameroon, Kedonge Forest Reserve, Mokoko Forest Reserve, Baro [outside Korup NP] and Oban Hills, Nigeria).
Publié par Walter Paulin Tapondjou Nkonmeneck à 16:20 1 commentaire: 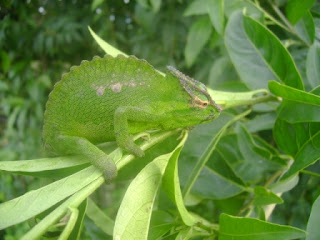 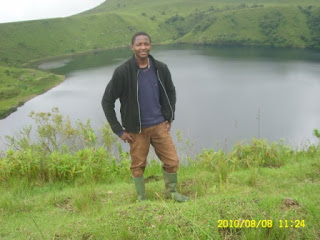 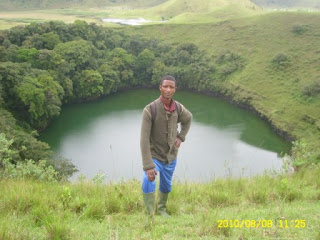